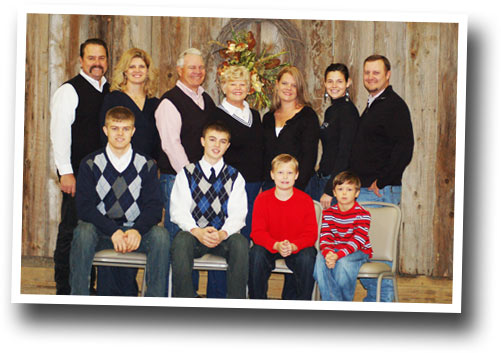 The Jackson's originated from Ohio where they produced grain, fed 500 head of feed lot cattle and maintained a purebred cow/calf herd. They farmed with Roy's parents, Edwin and Wilma. Edwin named the farm, Reality Farms, because of his dream of farming with his son became a reality.

Roy and Judy have been married for more than 50 years and raised three children, Laura, married to Keith Jeffries, Melanie Jackson Borowski and Matthew, married to Traci, and now have six grandchildren to enjoy.

Roy served on the American Chianina Board and enjoyed being a 4-H advisor for more than 30 years. Judy also was a 4-H leader and worked with the Ohio Jr. Chi kids for 10 years.

In 2004, Ohio became too crowded with new houses and traffic so they sold their farm and moved to Henry County, Kentucky to reorganize and expand on future plans. The Henry Co. farm was primarily a grain farm with no fences. Matt worked with Soil and Water Conservation to develop a cattle farm. Fences were built, old falling-down tobacco barns were torn down and replaced with cattle friendly barns. Ponds were enlarged and a underground water systems placed to accommodate pasture 4-ball watering systems. Erosion control was implemented to protect soil runoff. New pasture seeding and fertilizing was incorporated as well as rotational grazing. Due to these improvements the farm was awarded Henry County’s 2005 Conservationist of the Year.

Visitors will find quality Registered Angus. Reality Farms has a Bull Test Program each spring and utilizes an AI and embryo transfer program for the spring and fall calving seasons.The Jackson’s goals are to provide eye appealing cattle, and data, that will allow their customers to make informed decisions to best compliment their needs.

We are members of the American Angus Association. We have choices to supply Registered and commercial cattle to our clients.